Farm Management Canada started as the Canadian Farm Business Management Council in 1992. This year marks Farm Management Canada’s 30th anniversary! For the past 30 years, we have delivered countless programs, services and resources to help farmers across Canada achieve farm business excellence. We are proud of our accomplishments and invite you – our members, partners and supporters  to celebrate with us! Show us your support for farm business excellence by taking part in our celebration!

Click on the links below to learn more about our journey and to find out more about how you can join in on the celebration.

Farm Management Canada began as the Canada Farm Business Management Council in 1992. The Canadian Farm Business Management Council (CFBMC) was formed as a tripartite (federal-provincial-industry) organization to improve the business management skills of Canadian farm managers. An inaugural meeting was held in Ottawa, Ontario on June 29 & 30, 1992 and brought together a variety of representatives from each of the provinces. The organization was officially incorporated on November 12, 1992. The Board of Directors was compromised of 22 individuals: one farmer and one agricultural ministry representative from each province, as well as two representatives from the federal ministry of agriculture.

The CFBMC acted as the coordinating body for the National Farm Business Management Program (NFBMP). The NFBMP’s mission was to increase the profitability of farm businesses by helping farm managers develop and implement improved decision-making and business management practices. The NFBMP provided funding for projects with preference given to projects that were national in scope.

1998 saw a renewed agreement with Agriculture and Agri-Food Canada. There was some change in governance, which placed the Board in charge of policy and the Staff responsible for overseeing implementation.

In 1999, representatives from the Yukon and Northwest Territories joined the Board, achieving greater geographical and industry-specific representation for the Board.

2002 marked the 10th anniversary of the Council. Membership was opened up to individuals, associations, and corporations to enhance effectiveness and extend the influence of CFBMC in the agricultural sector. The Canadian Farm Business Management Council signed a new five-year agreement with Agriculture and Agri-Food Canada under the Agricultural Policy Framework. The Board composition underwent a restructuring from 26 Directors to 9 Directors comprised of four agricultural producers, four provincial or territorial governments, one representative from the private sector and an ex officio representative from Agriculture and Agri-Food Canada.

2007 marked the 15th anniversary of the Council. CFBMC created a new Strategic Vision and Mission. It describes a farm management environment where Canadian farm managers are informed, confident, and decisive in their approach to running their businesses.

In 2008, CFBMC entered into a new agreement with Agriculture and Agri-Food Canada under the new policy framework: Growing Forward, under the Renewal program.

In 2010, the Canadian Farm Business Management Council was challenged to rethink its activities, relevance and future. The Board decided to pursue a new CFBMC for the new economy. CFBMC adopted a new strategic direction to strengthen the organization’s position within the industry. The Board and staff worked diligently to become a model for governance, management and sustainability, to secure the future of the organization through Government and industry support. CFBMC secured a 3-year Contribution Agreement with Agriculture and Agri-Food Canada. The Board restructured its membership to six categories: farmer, member at large, academic institution, association/organization, provincial/territorial government and corporation. The Board also restructured its composition to one provincial/territorial government representative, a minimum of three farmers including at least one young farmer, and the remaining Directors representing four of six member categories. The Board maintained an ex officio representative from Agriculture and Agri-Food Canada.

2012 marked the 20th anniversary of the Council. Looking toward the future, CFBMC changed its name to Farm Management Canada with a new look and exciting new initiatives.

In 2018, a new policy framework: the Canadian Agricultural Partnership was introduced. Government contribution agreements were restricted to 3 and 2-year timeframes. Farm Management Canada secured a 3-year contribution agreement with Agriculture and Agri-Food Canada under the AgriCompetitiveness Program. Farm Management Canada was further challenged by the removal of government support for core organization activities including governance.

In 2019, the Board created a new Strategic Plan for the organization including a new vision, mission and strategic priorities focused on increasing partnership and collaborative efforts to prioritize farm business excellence within Canada’s agricultural sector.

In 2021, Farm Management Canada secured a 2-year contribution agreement with Agriculture and Agri-Food Canada under the Canadian Agricultural Partnership.

2022 marks the 30th anniversary of Farm Management Canada. We wish to thank Agriculture and Agri-Food Canada, our members, partners and colleagues for their continued support. As a vital part of our success for the past 30 years, we look forward to continuing to work together to build a strong future for Canada’s farmers and agricultural sector.

This media kit is filled with easy-to-use resources for promoting 30 years of farm business management excellence. Click on one of the images below to download  and share your support throughout your network! 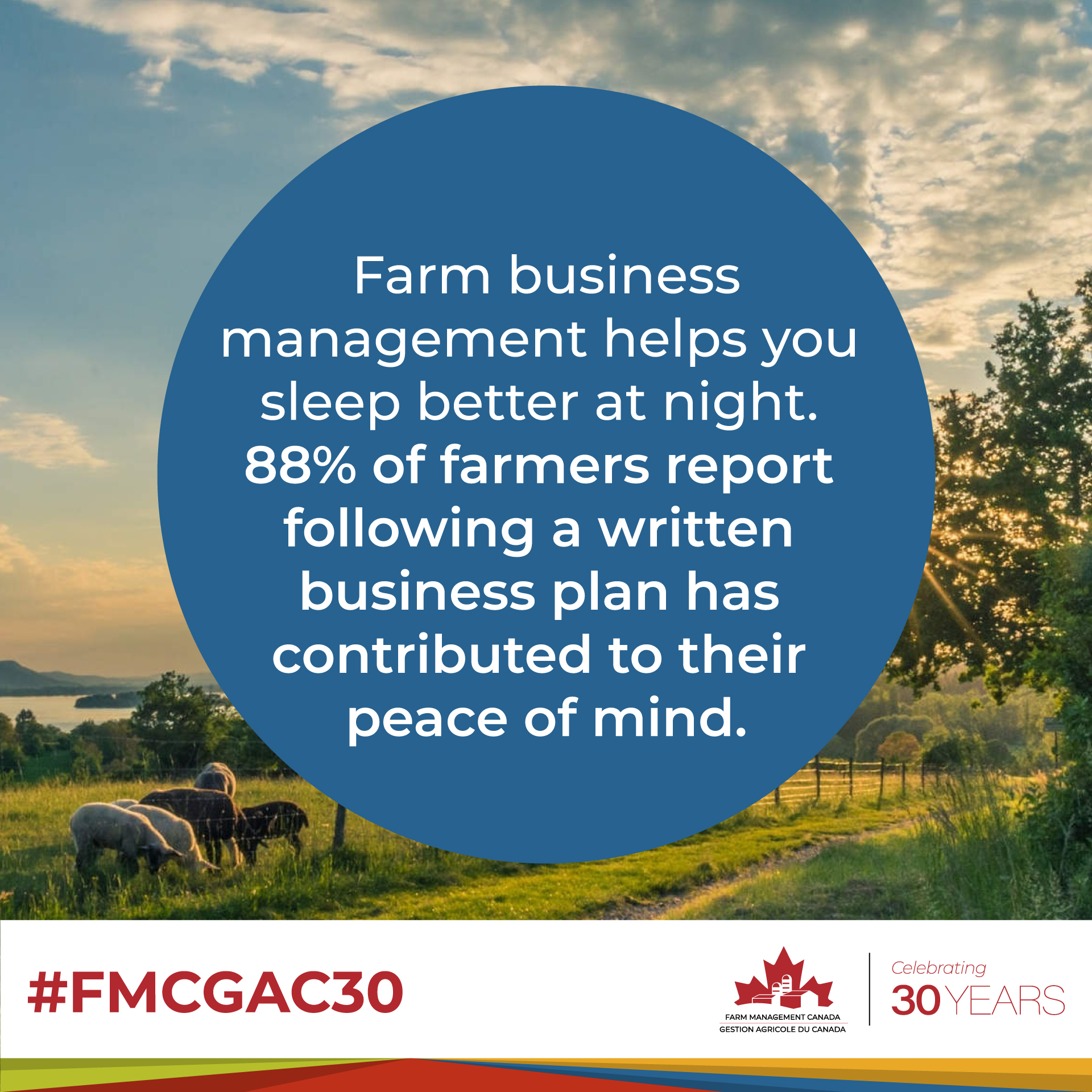 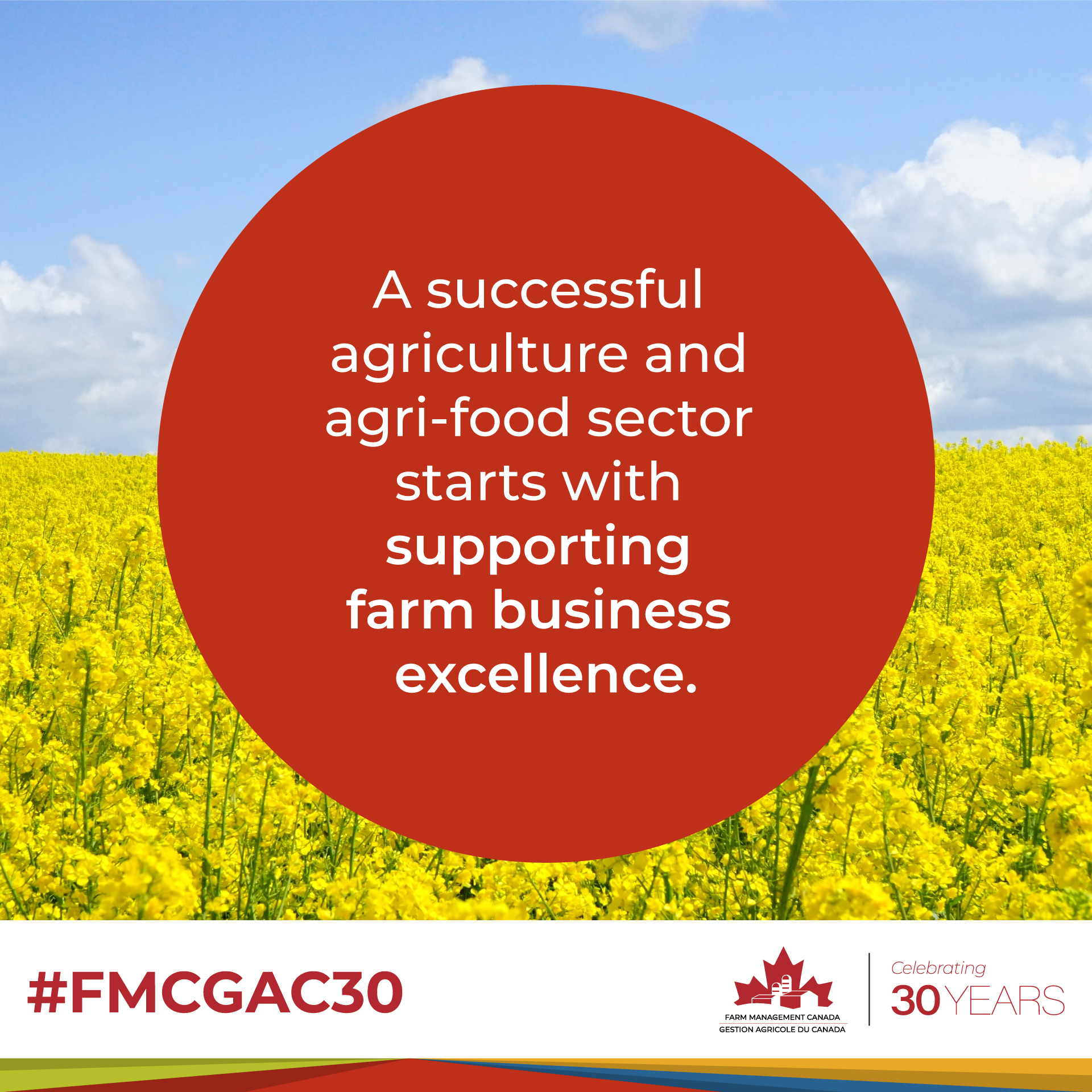 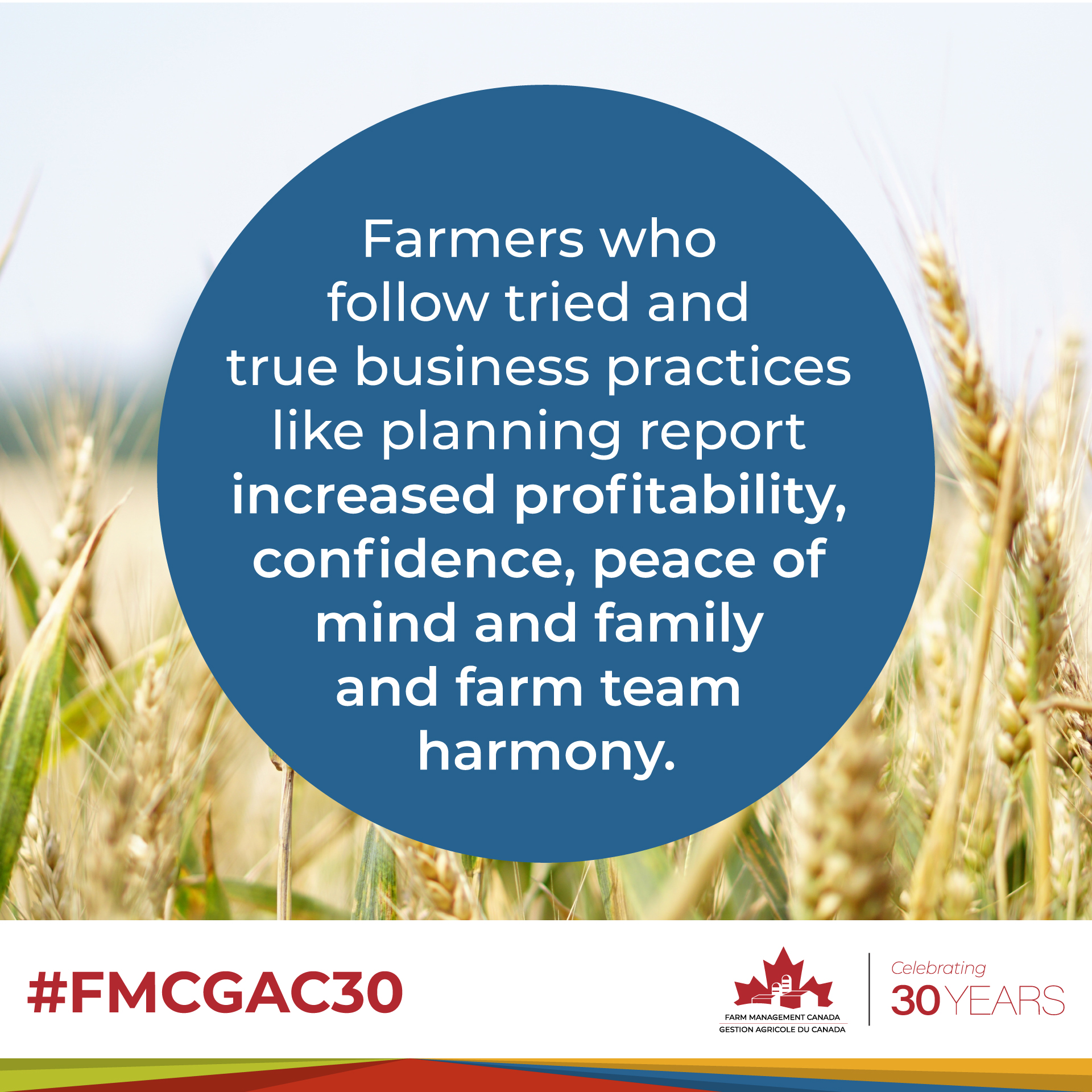 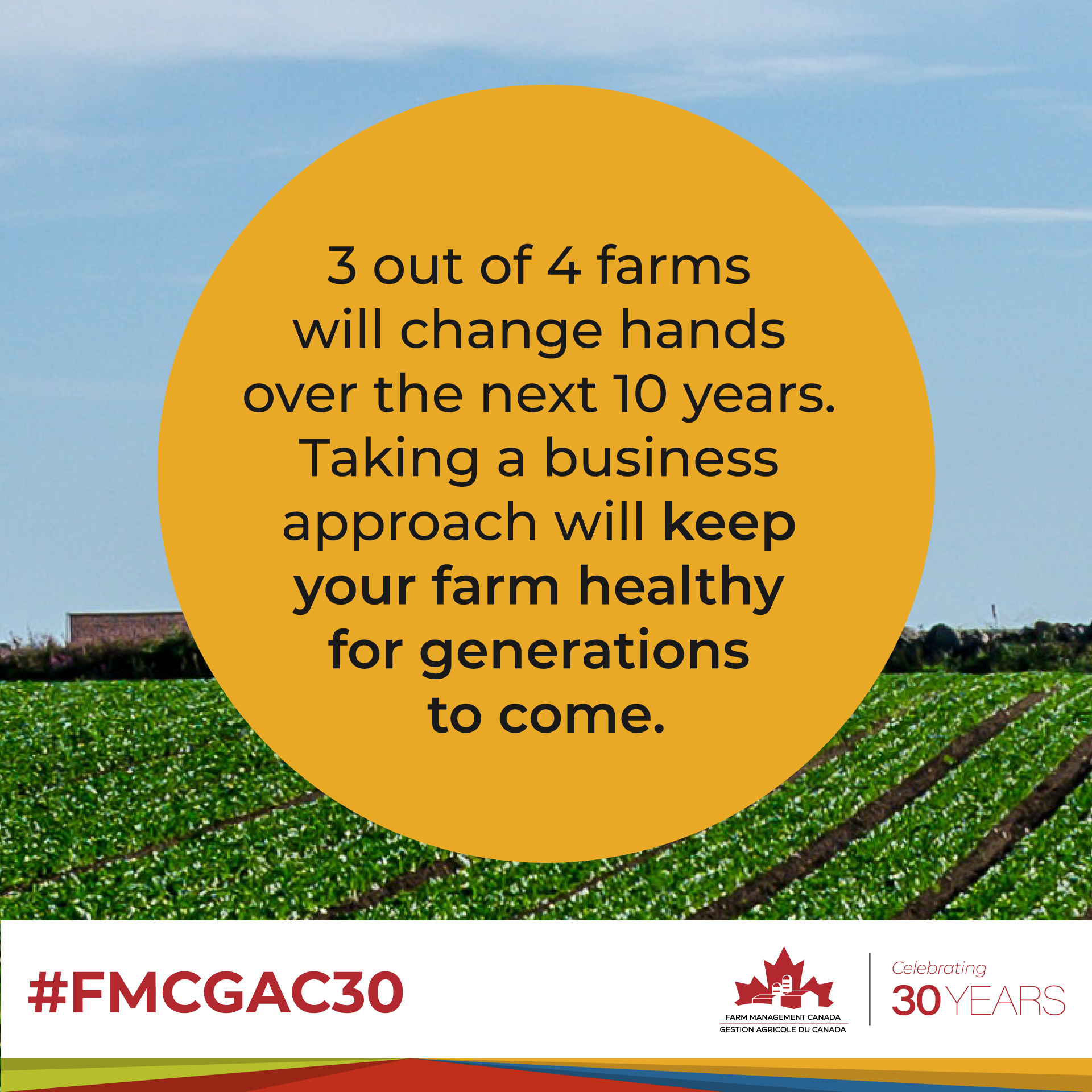 We would like to hear from you. How has our work made a difference? What impact has farm business management and/or our programs, services and resources had on you and your business?

Your testimonial could be showcased at our 30th anniversary celebration at the 2022 Agricultural Excellence Conference!